HUNDRETHS – Bohumila Grögerová
Cookie files helps us to provide services. By using our services, you agree to our use of cookies.
More information I acknowledge 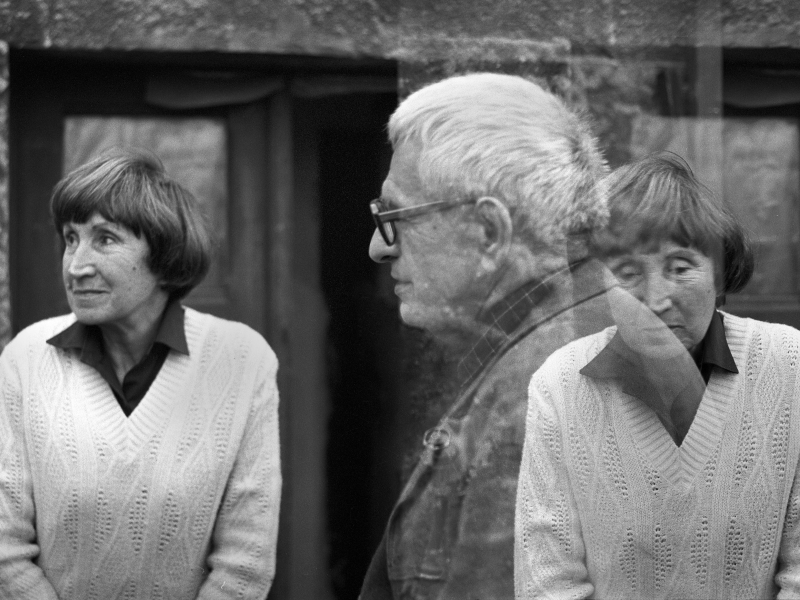 On August 7, 2021, Czech writer, translator and experimenter Bohumila Grögerová would celebrate her 100th birthday. As diverse as her work was, ranging from translations from several languages to active participation in the international movement of Concretism, to book journals and essays, one can find several common denominators not only in all her texts, but also in her way of thinking and living her life. The exhibition is based on the principles of her work (deconstruction, collage, layering space-time planes, universalism) and on her almost fifty-year collaboration with Josef Hiršal. It creates a dialogue with the present, taking into account some of the aspects of Bohumila Grögerová’s work and life that no viewer or reader has ever seen or read before. The Star Summer Palace is the ideal setting for the presentation of the author’s puns on the overall permeability of the world (“…what happens in me happens in the house”) or her fascination with quantum physics, the universe, fractals, kaleidoscopes, and mirrors.

Ten Thousand Changes Are Changing Again. These words could be the motto not only of this exhibition, but also of the time in which it takes place. How is 2021 different from 1921? Who was Bohumila Grögerová? Categories like “writer,” “translator” or “experimenter” fall far short of portraying the reality that shaped her generation in general and the artists and intellectuals of the time in general - and female artists and intellectuals in particular.

The 1940s, when Bohumila Grögerová entered adult life, were marked first by WWII and soon after by the Communist coup. These were not good times for long studies. University education was replaced by spontaneous “formation of autodidacts,” such as the circle of intellectuals and artists who gathered almost daily around the personality of the writer and artist Jiří Kolář in the Slavia café. Kolář kept his finger on the pulse of everything that was happening on the literary and artistic scene beyond the borders of the then hermetically sealed Czechoslovakia and he was the first to abandon the written word to find the extension of language in artistic expression, anticipating the blurring of the boundaries between the Muses and their claim to “total art.” Kolář’s influence is still clearly visible in the late work of Bohumila Grögerová, who never completely abandoned his method of collaging disparate texts.

The personality of Jiří Kolář is also interesting for the topic of the role of women artists in the shadow of men. The work of his wife, Běla Kolářová, who was a close friend of Bohumila Grögerová, was not fully appreciated until the end of her life; Grögerová’s work was similarly affected, albeit under different circumstance. Her texts that attracted the most attention were those written more than a decade after the death of Josef Hiršal, her lifelong companion who introduced her to the Prague artistic milieu. While a number of small reflections survive on how Grögerová found it harder or better to bear the fact that her joint translation work with Hiršal was at first attributed only to him, and at times only publicly presented by him, reflections of the other side, probably forever, are missing.

The necessity to survive the 1950s and the censored, distorted language of communist totalitarianism, the effort to confront and express objections against these circumstances, was not only the motive of the specific form of Czechoslovak concrete poetry, of which Grögerová and Hiršal were the protagonists, but they also formed an exceptional Czech school of translation (without being officially called such). Talented and linguistically erudite authors often translated and wrote children’s books instead of their own work – these were the only areas where they could realize their potential a little more freely and earn some money...

The twentieth century was said to be a time of the greatest amount of change humanity had ever seen. Not only politically, but also technologically. The Grögerová-Hiršal duo was in complete harmony with the techno-optimism of the late fifties and early sixties – in connection with the Stuttgart School of Max Bense and the world Concretist movement. They had a similarly distinct, but negative attitude to communist totalitarianism. Technooptimism never left them, the most telling proof of which was the fact that Bohumila Grögerová’s embraced audiobooks when she was almost ninety and almost blind. This was a few years before audiobooks experienced a world-wide boom. Grögerová had to have them sent to her from a Swiss center for the visually impaired, where they had an extensive library for more demanding readers, since only fairy tales were available in Czech at that time. Again, her literally avant-garde mindset – and polyglotism – saved her in this situation.

But it’s not just the media that has changed. At the time of this exhibition, we are in a completely different atmosphere than a century ago, and not only because of the revolution that digital technology has brought to the world of art and perception in general. The various emancipations – of women, minorities, animals, and nature as such – and the closely related transformation of museum, exhibition and curatorial practices are essential to the context of the exhibition. This is also why we have tried to give voice to the writer herself and not to interpret her in any way. However, the exhibition’s scenography and the selection of the texts presented are of course an interpretation of their own kind.

We let Bohumila Grögerová speak in the introductory comments to each room, which are thematically entitled Love – Creation – Reflection – Transformation – Death – Samadhi. In the installation itself, we have tried to draw on principles inherent in the writer’s work and psyche: we have taken into account her systematic yet playful nature, her fascination with various inventions (including their necessary obsolescence), the mirroring of everything in everything, the intermingling of temporal and spatial planes, human souls and the spirit of houses and places in general. We have also touched on her unwavering belief that, just as the borders between people and languages are permeable, so are the worlds separated by the mythical river Acheron: our physical world and the one that follows when we leave the body.

From 1952 until the end of her life, Bohumila Grögerová kept a reading list. She was similarly systematic in collecting extracts from literature in a rich card catalogue, as well as hundreds of recipes she arranged thematically rather than alphabetically. She revered rhythm, which was reflected in her radio plays, and she demonstrated a sense of geometry and a sense of balance in her graphic visualizations of words. Her systematic thinking also touched the place where she lived – she would surely have counted the stairs, windows and doors in the geomantically constructed Star Summer Palace– perhaps for better orientation, perhaps for a moment of appropriation.

We have tried to live up to Bohumila Grögerová’s motto “What happens in me, happens in the house” and approached the Star Summer House as if it were a personification of the author’s personality. For us, the staircase of the summer palace embodies the imaginary backbone of the house and the individual stairs its ribs. The seven decades of reading on the inside of the staircase capture the acquired knowledge. The exhibition follows the principle of mirroring (doubling) and is related to love and creation. Love mirrors creation: creation mirrors love. Bohumila Grögerová meets “Joska” Hiršal – Joska meets Jiří Kolář – Jiří Kolář meets Běla Kolářová – together they meet Ernst Jandl – who met Friederike Mayröcker... It’s like Grögerová’s childhood memory of “meeting” a little girl in the opposite window, with whom she played the tongue game before the girl’s mother banned them to do so – she defied the ban almost ninety years later, when she didn’t know whether the lady in the opposite window or on the opposite bench and with a similar stick was someone else or herself. There are countless reading grids for each artwork – but ultimately the most important chair in the room is Adriena Šimotová’s ideogram chair: an overture to the carefully calculated samadhi of the dome/attic, after which the dance of earthly existence may or may not begin again.

If Bohumila Grögerová could have been at her exhibition-celebration, if she could choose, she would undoubtedly have preferred to see something unexpected, something based on a bold, unknown invention (in our case, the photochromatic phenomenon used on the corridor wallpaper in the first-floor central room), or at least with some consistent method – not just a play on method (the compositional procedures of the mathematician Milan Guštar on the upper floor of the Star Summer Palace, in the so-called Banquet Hall). It is also true that every writer’s first and last wish is to be primarily read. We have attempted to fulfil both withes – in a transient star-shaped temple of the body in which we were “churchmen, organists, parish priests and pietists” for a while. But what and how the viewers or readers take from what is presented is always co-created by them. In the words of Bohumila Grögerová: “It is your fantasy, your imagination, your intention: take from me what suits you.”